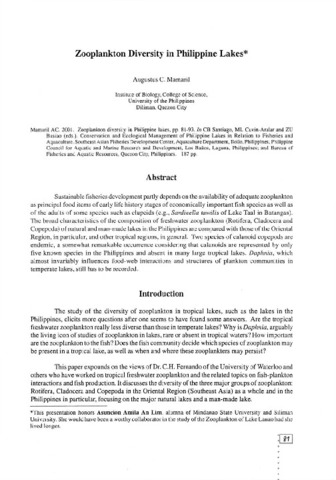 Sustainable fisheries development partly depends on the availability of adequate zooplankton as principal food items of early life history stages of economically important fish species as well as of the adults of some species such as clupeids (e.g., Sardinella tawilis of Lake Taal in Batangas). The broad characteristics of the composition of freshwater zooplankton (Rotifera, Cladocera and Copepoda) of natural and man-made lakes in the Philippines are compared with those of the Oriental Region, in particular, and other tropical regions, in general. Two species of calanoid copepods are endemic, a somewhat remarkable occurrence considering that calanoids are represented by only five known species in the Philippines and absent in many large tropical lakes. Daphnia, which almost invariably influences food-web interactions and structures of plankton communities in temperate lakes, still has to be recorded.