Preliminary observations on the diel feeding patterns of Nile tilapia Oreochromis niloticus (L.) in Laguna de Bay, Philippines, with the aid of the computer model MAXIMS 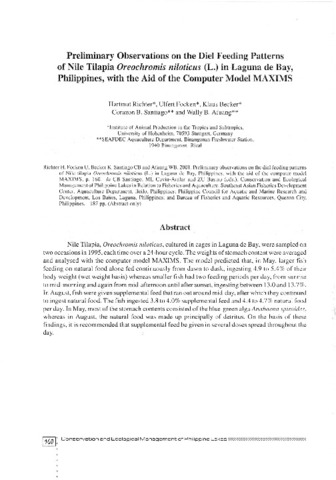 Nile Tilapia, Oreochromis niloticus, cultured in cages in Laguna de Bay, were sampled on two occasions in 1995, each time over a 24-hour cycle. The weights of stomach content were averaged and analysed with the computer model MAXIMS. The model predicted that, in May, larger fish feeding on natural food alone fed continuously from dawn to dusk, ingesting 4.9 to 5.4% of their body weight (wet weight basis) whereas smaller fish had two feeding periods per day, from sunrise to mid-morning and again from mid-afternoon until after sunset, ingesting between 13.0 and 13.7%. In August, fish were given supplemental feed that ran out around mid-day, after which they continued to ingest natural food. The fish ingested 3.8 to 4.0% supplemental feed and 4.4 to 4.7% natural food per day. In May, most of the stomach contents consisted of the blue-green alga Anabaena spiroides, whereas in August, the natural food was made up principally of detritus. On the basis of these findings, it is recommended that supplemental feed be given in several doses spread throughout the day.