An ecological approach to mariculture of shrimp: Shrimp ranching fisheries 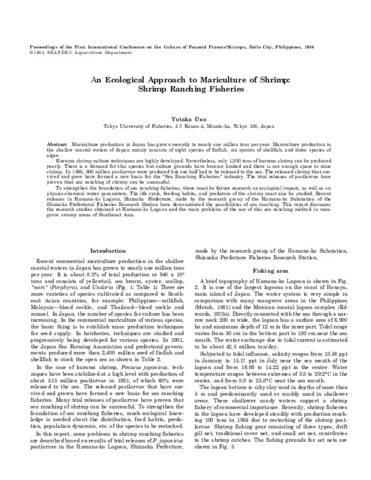 Mariculture production in Japan has grown recently to nearly one million tons per year. Mariculture production in the shallow coastal waters of Japan mainly consists of eight species of finfish, six species of shellfish, and three species of algae. Kuruma shrimp culture techniques are highly developed. Nevertheless, only 1,800 tons of kuruma shrimp can be produced yearly. There is a demand for this species but culture grounds have become limited and there is not enough space to raise shrimp. In 1980, 600 million postlarvae were produced but one-half had to be released to the sea. The released shrimp that survived and grew have formed a new basis for the "Sea Ranching Fisheries" industry. The trial releases of postlarvae have proven that sea ranching of shrimp can be successful. To strengthen the foundation of sea ranching fisheries, there must be future research on ecological impact, as well as on physico-chemical water parameters. The life cycle, feeding habits, and predators of the shrimp must also be studied. Recent releases in Hamana-ko Lagoon, Shizuoka Prefecture, made by the research group of the Hamana-ko Substation of the Shizuoka Prefectural Fisheries Research Station have demonstrated the possibilities of sea ranching. This report discusses the research studies obtained at Hamana-ko Lagoon and the main problems of the use of this sea ranching method in mangrove swamp areas of Southeast Asia.