Brackishwater shrimp culture in India and its impact on socio-economics 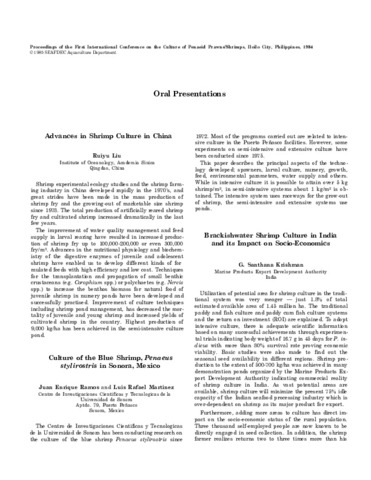 Utilization of potential area for shrimp culture in the traditional system was very meager — just 1.8% of total estimated available area of 1.45 million ha. The traditional paddy and fish culture and paddy cum fish culture systems and the return on investment (ROI) are explained. To adopt intensive culture, there is adequate scientific information based on many successful achievements throughexperimental trials indicating body weight of 16.7 g in 45 days for P. indicus with more than 80% survival rate proving economic viability. Basic studies were also made to find out the seasonal seed availability in different regions. Shrimp production to the extent of 500-700 kg/ha was achieved in many demonstration ponds organized by the Marine Products Export Development Authority indicating commercial reality of shrimp culture in India. As vast potential areas are available, shrimp culture will minimize the present 75% idle capacity of the Indian seafood processing industry which is over-dependent on shrimp as its major product for export. Furthermore, adding more areas to culture has direct impact on the socio-economic status of the rural population. Three thousand self-employed people are now known to be directly engaged in seed collection. In addition, the shrimp farmer realizes returns two to three times more than his counterpart in paddy cultivation, in the same field and for more or less the same period of time. In West Bengal, of total export value of 43 crores, up to 25 crores is realized by farmers for their production of shrimp through culture reflecting better unit return for their raw material than that realized byprocessor/exporter of the end-product. Therefore, bringing additional areas under shrimp culture will directly affect the socio-economic status of the rural people employing an average of 5 persons/ha, and indirectly affect no less than 15,000 casual workers in the seafood processing industry by additional utilization of manpower and working hours. As productivity from capture appears bleak, brackish-water shrimp culture has been accorded top priority in India's national developmental programmes for more harvest from aquatic sources otherwise termed the "Blue Revolution."