Larval growth and survival optima for four species of penaeids from Australia, as indicated by their distribution and abundance in the field 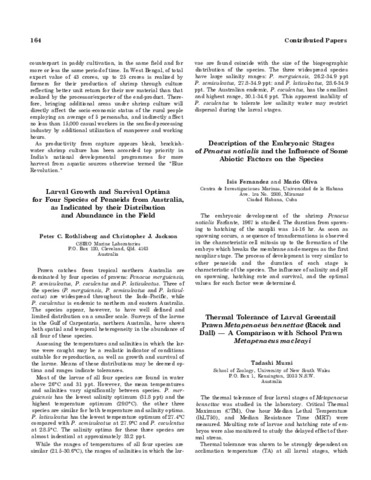 Prawn catches from tropical northern Australia are dominated by four species of prawns: Penaeus merguiensis, P. semisulcatus, P. esculentus and P. latisulcatus. Three of the species (P. merguiensis, P. semisulcatus and P. latisulcatus) are widespread throughout the Indo-Pacific, while P. esculentus is endemic to northern and eastern Australia. The species appear, however, to have well defined and limited distribution on a smaller scale. Surveys of the larvae in the Gulf of Carpentaria, northern Australia, have shown both spatial and temporal heterogeneity in the abundance of all four of these species. Assessing the temperatures and salinities in which the larvae were caught may be a realistic indicator of conditions suitable for reproduction, as well as growth and survival of the larvae. Means of these distributions may be deemed optima and ranges indicate tolerances. Most of the larvae of all four species are found in water above 26°C and 31 ppt. However, the mean temperatures and salinities vary significantly between species. P. merguiensis has the lowest salinity optimum (31.8 ppt) and the highest temperature optimum (29.0°C). the other three species are similar for both temperature and salinity optima. P. latisulcatus has the lowest temperature optimum of 27.4°C compared with P. semisulcatus at 27.9°C and P. esculentus at 28.5°C. The salinity optima for these three species are almost indentical at approximately 33.2 ppt. While the ranges of temperatures of all four species are similar (21.5-30.6°C), the ranges of salinities in which the lar-vae are found coincide with the size of the biogeographic distribution of the species. The three widespread species have large salinity ranges: P. merguiensis, 26.2-34.9 ppt P. semisulcatus, 27.8-34.9 ppt: and P. latisulcatus, 28.6-34.9 ppt. The Australian endemic, P. esculentus, has the smallest and highest range, 30.1-34.6 ppt. This apparent inability of P. esculentus to tolerate low salinity water may restrict dispersal during the larval stages.