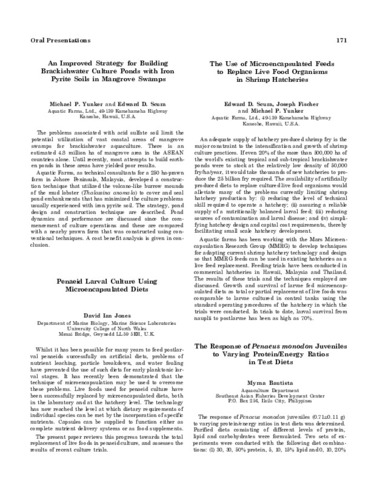 An adequate supply of hatchery produced shrimp fry is the major constraint to the intensification and growth of shrimp culture practices. If even 20% of the more than 500,000 ha of the world's existing tropical and sub-tropical brackishwater ponds were to stock at the relatively low density of 50,000 fry/ha/year, it would take thousands of new hatcheries to produce the 25 billion fry required. The availability of artificially produced diets to replace cultured live food organisms would alleviate many of the problems currently limiting shrimp hatchery production by: (i) reducing the level of technical skill required to operate a hatchery; (ii) assuring a reliable supply of a nutritionally balanced larval feed; (iii) reducing sources of contamination and larval disease; and (iv) simplifying hatchery design and capital cost requirements, thereby facilitating small scale hatchery development. Aquatic farms has been working with the Mars Microencapsulation Research Group (MMRG) to develop techniques for adapting current shrimp hatchery technology and design so that MMRG feeds can be used in existing hatcheries as a live feed replacement. Feeding trials have been conducted in commercial hatcheries in Hawaii, Malaysia and Thailand. The results of these trials and the techniques employed are discussed. Growth and survival of larvae fed microencapsulated diets as total or partial replacement of live foods was comparable to larvae cultured in control tanks using the standard operating procedures of the hatchery in which the trials were conducted. In trials to date, larval survival from nauplii to postlarvae has been as high as 70%.