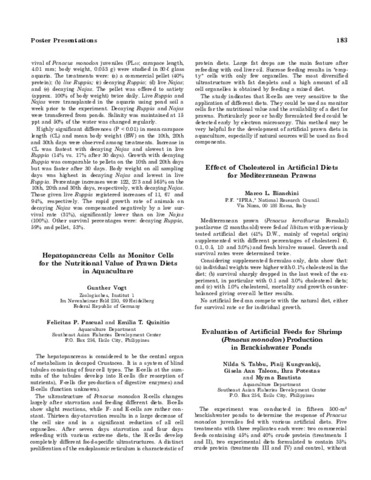 The experiment was conducted in fifteen 500-m2 brackishwater ponds to determine the response of Penaeus monodon juveniles fed with various artificial diets. Five treatments with three replicates each were: two commercial feeds containing 45% and 40% crude protein (treatments I and II), two experimental diets formulated to contain 35% crude protein (treatments III and IV) and control, without feeding (treatment V). Shrimp were fed twice daily at feeding rates based on shrimp consumption. Highest mean harvest weight was attained in treatment I (23.47 g) > III (19.25 g) > II (18.86 g) > IV (11.29 g) > V (9.27 g). Statistical analysis showed that differences in growth were significant at 5% probability level. However, growth in treatments I, II and III are comparable, also growth in treatments II, III and IV. Growth in treatments I, II, III and IV was significantly different from treatment V. Highest mean survival was attained in treatment III (91.82%) > I (88.93%) > II (86.95%) > IV (83.62%) V (82.62%). Statistical analysis showed no significant differences among treatments at 5% probability level. Projecting on a hectare basis, mean yield for each treatment was: I (628.37 kg) > II (496.35 kg) per crop in 120 days culture. Good yield was attributed to provision of formulated feeds, use of pumps in addition to tidal change for water exchange and control of predators, and pest eradication through proper pond preparation.