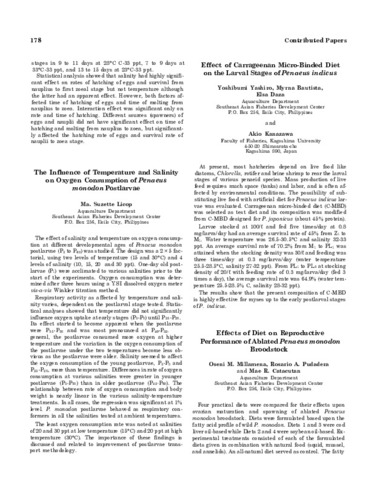 At present, most hatcheries depend on live food like diatoms, Chlorella, rotifer and brine shrimp to rear the larval stages of various penaeid species. Mass production of live feed requires much space (tanks) and labor, and is often affected by environmental conditions. The possibility of substituting live food with artificial diet for Penaeus indicus larvae was evaluated. Carrageenan micro-binded diet (C-MBD) was selected as test diet and its composition was modified from C-MBD designed for P. japonicus (about 45% protein). Larvae stocked at 100/ℓ and fed five times/day at 0.8 mg/larva/day had an average survival rate of 45% from Z1 to M1. Water temperature was 26.5-30.5°C and salinity 32-33 ppt. An average survival rate of 70.2% from M1 to PL1 was attained when the stocking density was 30/ℓ and feeding was three times/day at 0.3 mg/larva/day (water temperature 25.5-28.5°C, salinity 27-32 ppt). From PL1 to PL5 at stocking density of 20/ℓ with feeding rate of 0.3 mg/larva/day (fed 3 times a day), the average survival rate was 64.9% (water temperature 25.5-28.5% C, salinity 28-32 ppt). The results show that the present composition of C-MBD is highly effective for myses up to the early postlarval stages of P. indicus.