Development of freshwater prawn (Macrobrachium rosenbergii) seed production and culture technology in the Mekong Delta Region of Vietnam: A review of the JIRCAS Project at Cantho University. 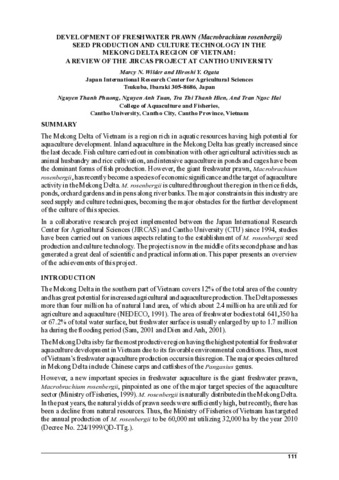 The Mekong Delta of Vietnam is a region rich in aquatic resources having high potential for aquaculture development. Inland aquaculture in the Mekong Delta has greatly increased since the last decade. Fish culture carried out in combination with other agricultural activities such as animal husbandry and rice cultivation, and intensive aquaculture in ponds and cages have been the dominant forms of fish production. However, the giant freshwater prawn, Macrobrachium rosenbergii, has recently become a species of economic significance and the target of aquaculture activity in the Mekong Delta. M. rosenbergii is cultured throughout the region in the rice fields, ponds, orchard gardens and in pens along river banks. The major constraints in this industry are seed supply and culture techniques, becoming the major obstacles for the further development of the culture of this species. In a collaborative research project implemented between the Japan International Research Center for Agricultural Sciences (JIRCAS) and Cantho University (CTU) since 1994, studies have been carried out on various aspects relating to the establishment of M. rosenbergii seed production and culture technology. The project is now in the middle of its second phase and has generated a great deal of scientific and practical information. This paper presents an overview of the achievements of this project.