Seafarming and searanching development in the Philippines 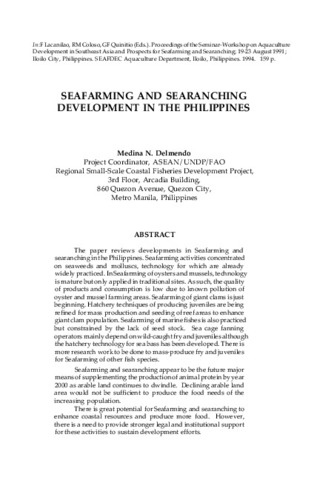 The paper reviews developments in Seafarming and searanching in the Philippines. Seafarming activities concentrated on seaweeds and molluscs, technology for which are already widely practiced. In Seafarming of oysters and mussels, technology is mature but only applied in traditional sites. As such, the quality of products and consumption is low due to known pollution of oyster and mussel farming areas. Seafarming of giant clams is just beginning. Hatchery techniques of producing juveniles are being refined for mass production and seeding of reef areas to enhance giant clam population. Seafarming of marine fishes is also practiced but constrained by the lack of seed stock. Sea cage fanning operators mainly depend on wild-caught fry and juveniles although the hatchery technology for sea bass has been developed. There is more research work to be done to mass-produce fry and juveniles for Seafarming of other fish species. Seafarming and searanching appear to be the future major means of supplementing the production of animal protein by year 2000 as arable land continues to dwindle. Declining arable land area would not be sufficient to produce the food needs of the increasing population. There is great potential for Seafarming and searanching to enhance coastal resources and produce more food. However, there is a need to provide stronger legal and institutional support for these activities to sustain development efforts.