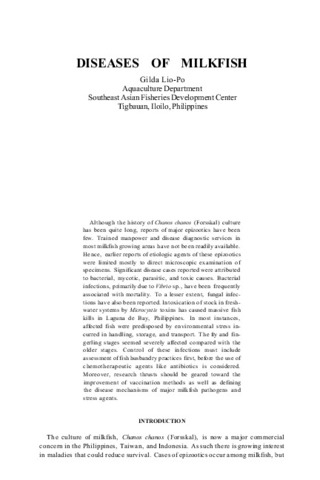 Although the history of Chanos chanos culture has been quite long, reports of major epizootics have been few. Trained manpower and disease diagnostic services in most milkfish growing areas have not been readily available. Hence, earlier reports of etiologic agents of these epizootics were limited mostly to direct microscopic examination of specimens. Significant disease cases reported were attributed to bacterial, myotic, parasitic, and toxic causes. Bacterial infections, primarily due to Vibrio sp., have been frequently associated with mortality. To a lesser, extent fungal infections have also been reported. Intoxication of stock in freshwater systems by Microcystis toxins has caused massive fish kills in Laguna de Bay, Philippines. In most instances, affected fish were predisposed by environmental stress incurred in handling storage and transport. The fry and fingerling stages seemed severely affected compared with the older stages. Control of these infections must include assessment of fish husbandry practices first, before the use of chemotherapeutic agents like antibiotics is considered.