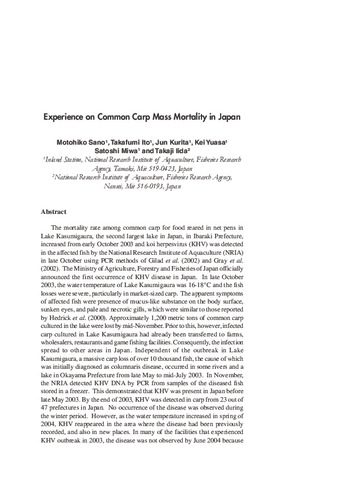 The mortality rate among common carp for food reared in net pens in Lake Kasumigaura, the second largest lake in Japan, in Ibaraki Prefecture, increased from early October 2003 and koi herpesvirus (KHV) was detected in the affected fish by the National Research Institute of Aquaculture (NRIA) in late October using PCR methods of Gilad et al. (2002) and Gray et al. (2002). The Ministry of Agriculture, Forestry and Fisheries of Japan officially announced the first occurrence of KHV disease in Japan. In late October 2003, the water temperature of Lake Kasumigaura was 16-180C and the fish losses were severe, particularly in market-sized carp. The apparent symptoms of affected fish were presence of mucus-like substance on the body surface, sunken eyes, and pale and necrotic gills, which were similar to those reported by Hedrick et al. (2000). Approximately 1,200 metric tons of common carp cultured in the lake were lost by mid-November. Prior to this, however, infected carp cultured in Lake Kasumigaura had already been transferred to farms, wholesalers, restaurants and game fishing facilities. Consequently, the infection spread to other areas in Japan. Independent of the outbreak in Lake Kasumigaura, a massive carp loss of over 10 thousand fish, the cause of which was initially diagnosed as columnaris disease, occurred in some rivers and a lake in Okayama Prefecture from late May to mid-July 2003. In November, the NRIA detected KHV DNA by PCR from samples of the diseased fish stored in a freezer. This demonstrated that KHV was present in Japan before late May 2003. By the end of 2003, KHV was detected in carp from 23 out of 47 prefectures in Japan. No occurrence of the disease was observed during the winter period. However, as the water temperature increased in spring of 2004, KHV reappeared in the area where the disease had been previously recorded, and also in new places. In many of the facilities that experienced KHV outbreak in 2003, the disease was not observed by June 2004 because all carp had been removed together with other fish species and the facilities were disinfected thoroughly after the outbreaks. From January to the end of May 2004, KHV infections were reported in 24 of 47 prefectures in Japan.