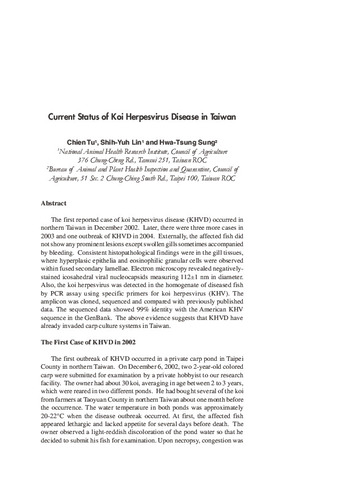 The first reported case of koi herpesvirus disease (KHVD) occurred in northern Taiwan in December 2002. Later, there were three more cases in 2003 and one outbreak of KHVD in 2004. Externally, the affected fish did not show any prominent lesions except swollen gills sometimes accompanied by bleeding. Consistent histopathological findings were in the gill tissues, where hyperplasic epithelia and eosinophilic granular cells were observed within fused secondary lamellae. Electron microscopy revealed negativelystained icosahedral viral nucleocapsids measuring 112?1 nm in diameter. Also, the koi herpesvirus was detected in the homogenate of diseased fish by PCR assay using specific primers for koi herpesvirus (KHV). The amplicon was cloned, sequenced and compared with previously published data. The sequenced data showed 99% identity with the American KHV sequence in the GenBank. The above evidence suggests that KHVD have already invaded carp culture systems in Taiwan.