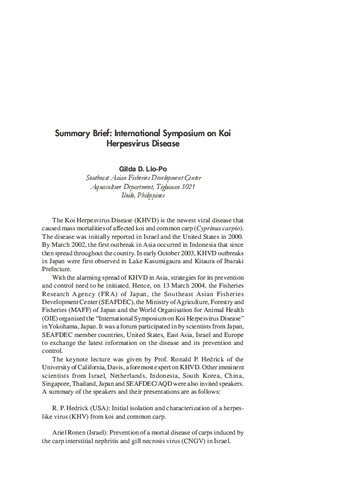 The Koi Herpesvirus Disease (KHVD) is the newest viral disease that caused mass mortalities of affected koi and common carp (Cyprinus carpio). The disease was initially reported in Israel and the United States in 2000. By March 2002, the first outbreak in Asia occurred in Indonesia that since then spread throughout the country. In early October 2003, KHVD outbreaks in Japan were first observed in Lake Kasumigaura and Kitaura of Ibaraki Prefecture.With the alarming spread of KHVD in Asia, strategies for its prevention and control need to be initiated. Hence, on 13 March 2004, the Fisheries Research Agency (FRA) of Japan, the Southeast Asian Fisheries Development Center (SEAFDEC), the Ministry of Agriculture, Forestry and Fisheries (MAFF) of Japan and the World Organisation for Animal Health (OIE) organized the "International Symposium on Koi Herpesvirus Disease" in Yokohama, Japan. It was a forum participated in by scientists from Japan, SEAFDEC member countries, United States, East Asia, Israel and Europe to exchange the latest information on the disease and its prevention and control.