Biological hazard possibly produced by aquaculture and its control 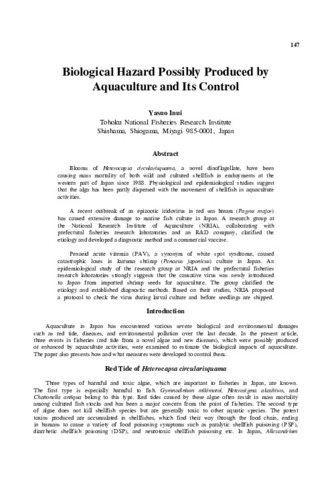 Blooms of Neterocapsa circularisquama, a novel dinoflagellate, have been causing mass mortality of both wild and cultured shellfish in embayments at the western part of Japan since 1988. Physiological and epidemiological studies suggest that the alga has been partly dispersed with the movement of shellfish in aquaculture activities. A recent outbreak of an epizootic iridovirus in red sea bream (Pagrus major) has caused extensive damage to marine fish culture in Japan. A research group at the National Research Institute of Aquaculture (NRIA), collaborating with prefectural fisheries research laboratories and an R&D company, clarified the etiology and developed a diagnostic method and a commercial vaccine. Penaeid acute viremia (PAV), a synonym of white spot syndrome, caused catastrophic loses in kuruma shrimp (Penaeus japonicus) culture in Japan. An epidemiological study of the research group at NRIA and the prefectural fisheries research laboratories strongly suggests that the causative virus was newly introduced to Japan from imported shrimp seeds for aquaculture. The group clarified the etiology and established diagnostic methods. Based on their studies, NRIA proposed a protocol to check the virus during larval culture and before seedlings are shipped.