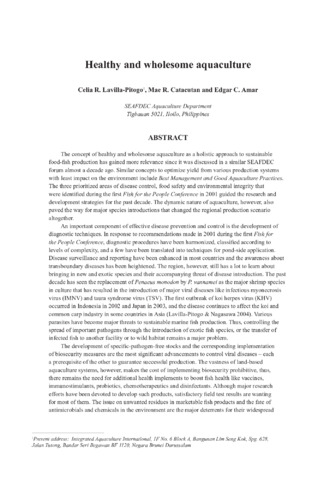 The concept of healthy and wholesome aquaculture as a holistic approach to sustainable food-fish production has gained more relevance since it was discussed in a similar SEAFDEC forum almost a decade ago. Similar concepts to optimize yield from various production systems with least impact on the environment include Best Management and Good Aquaculture Practices. The three prioritized areas of disease control, food safety and environmental integrity that were identified during the first Fish for the People Conference in 2001 guided the research and development strategies for the past decade. The dynamic nature of aquaculture, however, also paved the way for major species introductions that changed the regional production scenario altogether. An important component of effective disease prevention and control is the development of diagnostic techniques. In response to recommendations made in 200I during the first Fish for the People Conference, diagnostic procedures have been harmonized, classified according to levels of complexity, and a few have been translated into techniques for pond-side application. Disease surveillance and reporting have been enhanced in most countries and the awareness about transboundary diseases has been heightened. The region, however, still has a lot to learn about bringing in new and exotic species and their accompanying threat of disease introduction. The past decade has seen the replacement of Penaeus monodon by P. vannamei as the major shrimp species in culture that has resulted in the introduction of major viral diseases like infectious myonecrosis virus (lMNV) and taura syndrome virus (TSV). The first outbreak of koi herpes virus (KHV) occurred in Indonesia in 2002 and Japan in 2003, and the disease continues to affect the koi and common carp industry in some countries in Asia (Lavilla-Pitogo & Nagasawa 2004). Various parasites have become major threats to sustainable marine fish production. Thus, controlling the spread of important pathogens through the introduction of exotic fish species, or the transfer of infected fish to another facility or to wild habitat remains a major problem. The development of specific-pathogen-free stocks and the corresponding implementation of biosecurity measures are the most significant advancements to control viral diseases each a prerequisite of the other to guarantee successful production. The vastness of land-based aquaculture systems, however, makes the cost of implementing biosecurity prohibitive, thus, there remains the need for additional health implements to boost fish health like vaccines, immunostimulants, probiotics, chemotherapeutics and disinfectants. Although major research efforts have been devoted to develop such products, satisfactory field test results are wanting for most of them. The issue on unwanted residues in marketable fish products and the fate of antimicrobials and chemicals in the environment are the major deterrents for their widespread application in aquaculture. Furthermore, the lack of fish health professionals that are qualified to prescribe drugs and chemotherapeutants in aquaculture is an issue that needs urgent action in the region. The clamor for aquaculture to reduce its dependence on fish meal as the source of protein in artificial feeds has led to numerous studies about fishmeal substitutes. The search for suitable alternative fish feed ingredients may now require a combination of biochemical engineering and manufacturing to enhance the nutritional composition of non-traditional protein sources. Fishmeal substitutes and other feed ingredients that will not compromise fish health and drastically alter carcass composition needs to be developed. Since proper feed management is a key component for farm profitability and sustainability as well as in the reduction of environmental pollution, extension and technology transfer should continue so that various stakeholders will be informed of their responsibility. Efforts to improve fish feed development should continue keeping in mind that feed is a key determinant of fish health. For aquaculture to meet the target production to supply the protein requirements of a burgeoning global population, production systems should further emphasize the key components of keeping diseases under control, producing fish that pass food safety standards, and maintaining the integrity of the culture system and its environment. In various countries, supportive efforts are in the form of certification, accreditation and compliance of aquaculture facilities with standards. However, aquaculture, being a relatively new sector in the food production industry, needs to harmonize its efforts with other common resource users.