Preliminary chemical and physical evaluation of some formulated feeds for P. monodon 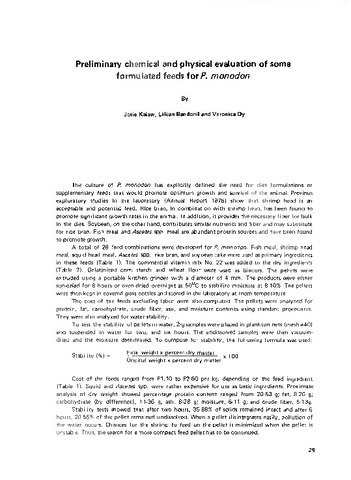 The culture of Penaeus monodon has explicitly defined the need for diet formulations or supplementary feeds that would promote optimum growth and survival of the animal. A total of 28 feed combinations were developed for P. monodon. Fish meal, shrimp head meal, squid head meal, Ascetes spp. rice bran, and soybean cake were used as primary ingredients in these feeds. The commercial vitamin mix No. 22 was added to the dry ingredients. Gelatinized corn starch and wheat flour were used as binders. The pellets were extruded using a portable kitchen grinder with a diameter of 4 mm. The products were either sun-dried for 8 hours or oven-dried overnight at 50 degree C to stabilize moisture at 8-10%. The pellets were then kept in covered glass bottles and stored in the laboratory at room temperature. The cost of the feeds excluding labour were also computed. The pellets were analyzed for protein, fat, carbohydrate, crude fiber, ash, and moisture contents using standard procedures. They were also analyzed for water stability. To test the stability of pellets in water, 2-g samples were placed in plankton nets (mesh #40) and suspended in water for two, and six hours. The undissolved samples were then vacuum-dried and the moisture determined. Cost of the feeds ranged from P1.10 to P2.60 per kg depending on the feed ingredient. Squid and Ascetes spp. were rather expensive for use as basic ingredients. Proximate analysis of dry weight showed percentage protein content ranged from 20-63 g; fat, 8-20 g; carbohydrate (by difference), 11-36 g; ash, 8-28 g; moisture, 6-11 g; and crude fiber, 5 . 13 g. Stability tests showed that after two hours, 35-88% of solids remained intact and after 6 hours, 20-55% of the pellets remained undissolved. When a pellet disintegrates easily, pollution of the water occurs. Chances for the shrimp to feed on the pellet is minimized when the pellet is unstable. Thus, the search for a more compact feed pellet has to be continued.