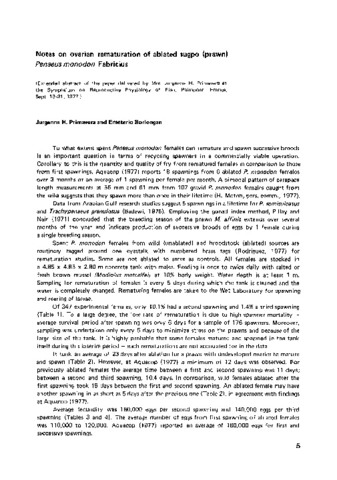 To what extent spent P. monodon females can remature and spawn successive broods is an important question in terms of recycling spawners in a commercially viable operation. Corollary to this is the quantity and quality of fry from rematured females in comparison to those from first spawning. Of 347 experimental females, only 10.1% had a second spawning, and 1.4% a third spawning. To a large degree the low rate of rematuration is due to high spawner mortality - average survival period after spawning was only 6 days in a sample of 176 spawners. It took an average of 23 days after ablation for a prawn with undeveloped ovaries to mature and spawn. An ablated female may have another spawning in as little as 5 days after the previous one. Average fecundity was 180,000 eggs per second spawning, and 140,000 eggs per third spawning. The average number of eggs from first spawning ablated females was 110-120,000. Hatching rate was lower for rematuration: 44% for second spawnings, and 35% for third spawnings, as compared to 64% for first maturation.

Extended abstract of the paper delivered by Mrs. Jurgenne H. Primavera at the Symposium on Reproductive Physiology of Fish, Paimpont, France, Sept. 19-21, 1977.