Status of transboundary diseases of penaeid shrimps in Singapore 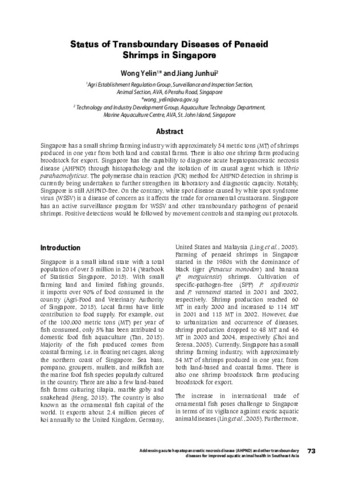 Singapore has a small shrimp farming industry with approximately 54 metric tons (MT) of shrimps produced in one year from both land and coastal farms. There is also one shrimp farm producing broodstock for export. Singapore has the capability to diagnose acute hepatopancreatic necrosis disease (AHPND) through histopathology and the isolation of its causal agent which is Vibrio parahaemolyticus. The polymerase chain reaction (PCR) method for AHPND detection in shrimp is currently being undertaken to further strengthen its laboratory and diagnostic capacity. Notably, Singapore is still AHPND-free. On the contrary, white spot disease caused by white spot syndrome virus (WSSV) is a disease of concern as it affects the trade for ornamental crustaceans. Singapore has an active surveillance program for WSSV and other transboundary pathogens of penaeid shrimps. Positive detections would be followed by movement controls and stamping out protocols.