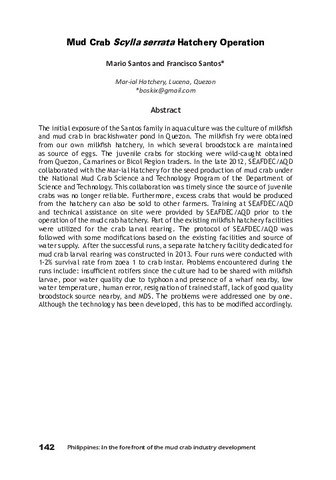 The initial exposure of the Santos family in aquaculture was the culture of milkfish (Chanos chanos) and mud crab (Scylla serrata) in brackishwater pond in Quezon. The milkfish fry were obtained from our own milkfish hatchery, in which several broodstock are maintained as source of eggs. The juvenile crabs for stocking were wild-caught obtained from Quezon, Camarines or Bicol Region traders. In the late 2012, SEAFDEC/AQD collaborated with the Mari-al Hatchery for the seed production of mud crab under the National Mud Crab S and T Program of the Department of Science and Technology. This collaboration was timely since the source of juvenile crabs was no longer reliable. Furthermore, excess crabs that would be produced from the hatchery can also be sold to other farmers. Training at SEAFDEC/AQD and technical assistance on site were provided by SEAFDEC/AQD prior to the operation of the mud crab hatchery. Part of the existing milkfish hatchery facilities were utilized for the crab larval rearing. The protocol of SEAFDEC/AQD was followed with some modifications based on the existing facilities and source of water supply. After the successful runs, a separate hatchery facility dedicated for mud crab larval rearing was constructed in 2013. Four runs were conducted with 1-2% survival rate from zoea 1 to crab instar. Problems encountered during the runs include: insufficient rotifers since the culture had to be shared with milkfish larvae, poor water quality due to typhoon and presence of a wharf nearby, low water temperature, human error, resignation of trained staff, lack of good quality broodstock source nearby, and MDS. The problems were addressed one by one. Although the technology has been developed, this has to be modified accordingly.