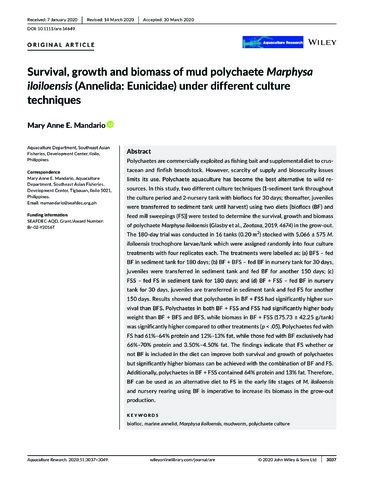 Polychaetes are commercially exploited as fishing bait and supplemental diet to crustacean and finfish broodstock. However, scarcity of supply and biosecurity issues limits its use. Polychaete aquaculture has become the best alternative to wild resources. In this study, two different culture techniques (1‐sediment tank throughout the culture period and 2‐nursery tank with bioflocs for 30 days; thereafter, juveniles were transferred to sediment tank until harvest) using two diets [bioflocs (BF) and feed mill sweepings (FS)] were tested to determine the survival, growth and biomass of polychaete Marphysa iloiloensis (Glasby et al., Zootaxa, 2019, 4674) in the grow‐out. The 180‐day trial was conducted in 16 tanks (0.20 m2) stocked with 5,066 ± 575 M. iloiloensis trochophore larvae/tank which were assigned randomly into four culture treatments with four replicates each. The treatments were labelled as: (a) BFS – fed BF in sediment tank for 180 days; (b) BF + BFS – fed BF in nursery tank for 30 days, juveniles were transferred in sediment tank and fed BF for another 150 days; (c) FSS – fed FS in sediment tank for 180 days; and (d) BF + FSS – fed BF in nursery tank for 30 days, juveniles are transferred in sediment tank and fed FS for another 150 days. Results showed that polychaetes in BF + FSS had significantly higher survival than BFS. Polychaetes in both BF + FSS and FSS had significantly higher body weight than BF + BFS and BFS, while biomass in BF + FSS (175.73 ± 42.25 g/tank) was significantly higher compared to other treatments (p < .05). Polychaetes fed with FS had 61%–64% protein and 12%–13% fat, while those fed with BF exclusively had 66%–70% protein and 3.50%–4.50% fat. The findings indicate that FS whether or not BF is included in the diet can improve both survival and growth of polychaetes but significantly higher biomass can be achieved with the combination of BF and FS. Additionally, polychaetes in BF + FSS contained 64% protein and 13% fat. Therefore, BF can be used as an alternative diet to FS in the early life stages of M. iloiloensis and nursery rearing using BF is imperative to increase its biomass in the grow‐out production.