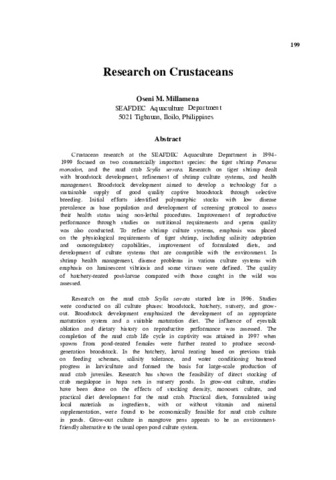 Crustacean research at the SEAFDEC Aquaculture Department in 1994-1999 focused on two commercially important species: the tiger shrimp Penaeus monodon, and the mud crab Scylla serrata. Research on tiger shrimp dealt with broodstock development, refinement of shrimp culture systems, and health management. Broodstock development aimed to develop a technology for a sustainable supply of good quality captive broodstock through selective breeding. Initial efforts identified polymorphic stocks with low disease prevalence as base population and development of screening protocol to assess their health status using non-lethal procedures. Improvement of reproductive performance through studies on nutritional requirements and sperm quality was also conducted. To refine shrimp culture systems, emphasis was placed on the physiological requirements of tiger shrimp, including salinity adaptation and osmoregulatory capabilities, improvement of formulated diets, and development of culture systems that are compatible with the environment. In shrimp health management, disease problems in various culture systems with emphasis on luminescent vibriosis and some viruses were defined. The quality of hatchery-reared post-larvae compared with those caught in the wild was assessed. Research on the mud crab Scylla serrata started late in 1996. Studies were conducted on all culture phases: broodstock, hatchery, nursery, and grow-out. Broodstock development emphasized the development of an appropriate maturation system and a suitable maturation diet. The influence of eyestalk ablation and dietary history on reproductive performance was assessed. The completion of the mud crab life cycle in captivity was attained in 1997 when spawns from pond-reared females were further reared to produce second-generation broodstock. In the hatchery, larval rearing based on previous trials on feeding schemes, salinity tolerance, and water conditioning hastened progress in larviculture and formed the basis for large-scale production of mud crab juveniles. Research has shown the feasibility of direct stocking of crab megalopae in hapa nets in nursery ponds. In grow-out culture, studies have been done on the effects of stocking density, monosex culture, and practical diet development for the mud crab. Practical diets, formulated using local materials as ingredients, with or without vitamin and mineral supplementation, were found to be economically feasible for mud crab culture in ponds. Grow-out culture in mangrove pens appears to be an environment-friendly alternative to the usual open pond culture system.