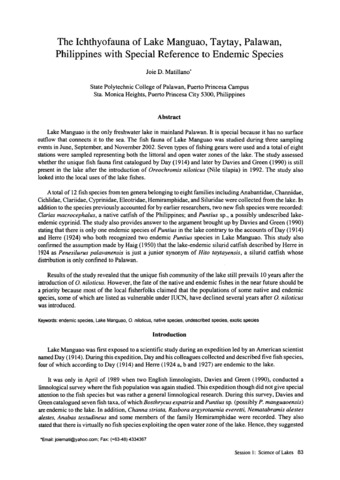 Lake Manguao is the only freshwater lake in mainland Palawan. It is special because it has no surface outflow that connects it to the sea. The fish fauna of Lake Manguao was studied during three sampling events in June, September, and November 2002. Seven types of fishing gears were used and a total of eight stations were sampled representing both the littoral and open water zones of the lake. The study assessed whether the unique fish fauna first catalogued by Day (1914) and later by Davies and Green (1990) is still present in the lake after the introduction of Oreochromis niloticus (Nile tilapia) in 1992. The study also looked into the local uses of the lake fishes. A total of 12 fish species from ten genera belonging to eight families including Anabantidae, Channidae, Cichlidae, Clariidae, Cyprinidae, Eleotridae, Hemiramphidae, and Siluridae were collected from the lake. In addition to the species previously accounted for by earlier researchers, two new fish species were recorded: Clarias macrocephalus, a native catfish of the Philippines; and Puntius sp., a possibly undescribed lake-endemic cyprinid. The study also provides answer to the argument brought up by Davies and Green (1990) stating that there is only one endemic species of Puntius in the lake contrary to the accounts of Day (1914) and Herre (1924) who both recognized two endemic Puntius species in Lake Manguao. This study also confirmed the assumption made by Haig (1950) that the lake-endemic silurid catfish described by Herre in 1924 as Penesilurus palavanensis is just a junior synonym of Hito taytayensis, a silurid catfish whose distribution is only confined to Palawan. Results of the study revealed that the unique fish community of the lake still prevails 10 years after the introduction of O. niloticus. However, the fate of the native and endemic fishes in the near future should be a priority because most of the local fisherfolks claimed that the populations of some native and endemic species, some of which are listed as vulnerable under IUCN, have declined several years after O. niloticus was introduced.