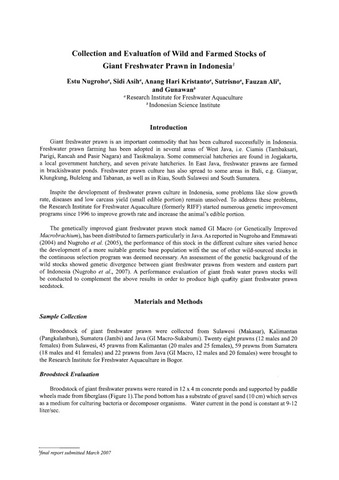 Giant freshwater prawn is an important commodity that has been cultured successfully in Indonesia. Freshwater prawn farming has been adopted in several areas of West Java, i.e. Ciamis (Tambaksari, Parigi, Rancah and Pasir Nagara) and Tasikmalaya. Some commercial hatcheries are found in Jogjakarta, a local government hatchery, and seven private hatcheries. In East Java, freshwater prawns are farmed in brackishwater ponds. Freshwater prawn culture has also spread to some areas in Bali, e.g. Gianyar, Klungkung, Buleleng and Tabanan, as well as in Riau, South Sulawesi and South Sumatera. Inspite the development of freshwater prawn culture in Indonesia, some problems like slow growth rate, diseases and low carcass yield (small edible portion) remain unsolved. To address these problems, the Research Institute for Freshwater Aquaculture (formerly RIFF) started numerous genetic improvement programs since 1996 to improve growth rate and increase the animal’s edible portion. The genetically improved giant freshwater prawn stock named GI Macro (or Genetically Improved Macrobrachium), has been distributed to farmers particularly in Java. As reported in Nugroho and Emmawati (2004) and Nugroho et al. (2005), the performance of this stock in the different culture sites varied hence the development of a more suitable genetic base population with the use of other wild-sourced stocks in the continuous selection program was deemed necessary. An assessment of the genetic background of the wild stocks showed genetic divergence between giant freshwater prawns from western and eastern part of Indonesia (Nugroho et al., 2007). A performance evaluation of giant fresh water prawn stocks will be conducted to complement the above results in order to produce high quality giant freshwater prawn seedstock.