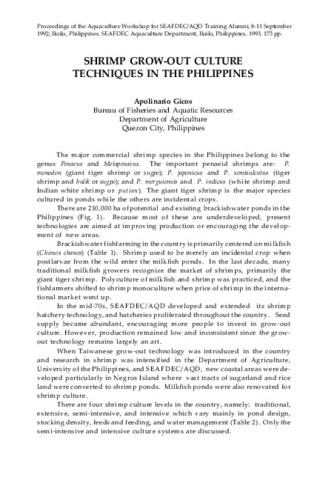 The major commercial shrimp species in the Philippines belong to the genus Penaeus and Metapenaeus. The important penaeid shrimps are: P. monodon (giant tiger shrimp or sugpo); P. japonicus and P. semisulcatus (tiger shrimp and bulik or sugpo); and P. merguiensis and P. indicus (white shrimp and Indian white shrimp or putian). The giant tiger shrimp is the major species cultured in ponds while the others are incidental crops. There are 210,000 ha of potential and existing brackishwater ponds in the Philippines (Fig. 1). Because most of these are underdeveloped, present technologies are aimed at improving production or encouraging the development of new areas. Brackishwater fishfarming in the country is primarily centered on milkfish (Chanos chanos) (Table 1). Shrimp used to be merely an incidental crop when postlarvae from the wild enter the milkfish ponds. In the last decade, many traditional milkfish growers recognize the market of shrimps, primarily the giant tiger shrimp. Polyculture of milkfish and shrimp was practiced, and the fishfarmers shifted to shrimp monoculture when price of shrimp in the international market went up. In the mid-70s, SEAFDEC/AQD developed and extended its shrimp hatchery technology, and hatcheries proliferated throughout the country. Seed supply became abundant, encouraging more people to invest in grow-out culture. However, production remained low and inconsistent since the growout technology remains largely an art. When Taiwanese grow-out technology was introduced in the country and research in shrimp was intensified in the Department of Agriculture, University of the Philippines, and SEAFDEC/AQD, new coastal areas were developed particularly in Negros Island where vast tracts of sugarland and rice land were converted to shrimp ponds. Milkfish ponds were also renovated for shrimp culture. There are four shrimp culture levels in the country, namely: traditional, extensive, semi-intensive, and intensive which vary mainly in pond design, stocking density, feeds and feeding, and water management (Table 2). Only the semi-intensive and intensive culture systems are discussed.