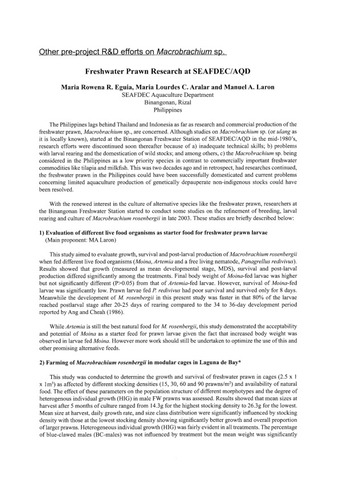 The Philippines lags behind Thailand and Indonesia as far as research and commercial production of the freshwater prawn, Macrobrachium sp., are concerned. Although studies on Macrobrachium sp. (or ulang as it is locally known), started at the Binangonan Freshwater Station of SEAFDEC/AQD in the mid-1980’s, research efforts were discontinued soon thereafter because of a) inadequate technical skills; b) problems with larval rearing and the domestication of wild stocks; and among others, c) the Macrobrachium sp. being considered in the Philippines as a low priority species in contrast to commercially important freshwater commodities like tilapia and milkfish. This was two decades ago and in retrospect, had researches continued, the freshwater prawn in the Philippines could have been successfully domesticated and current problems concerning limited aquaculture production of genetically depauperate non-indigenous stocks could have been resolved. With the renewed interest in the culture of alternative species like the freshwater prawn, researchers at the Binangonan Freshwater Station started to conduct some studies on the refinement of breeding, larval rearing and culture of Macrobrachium rosenbergii in late 2003. These studies are briefly described here.