The use of chemicals in aquaculture in Malaysia and Singapore 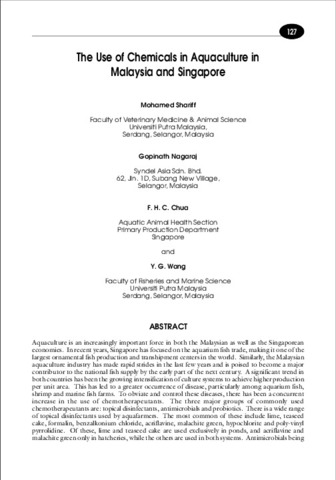 Aquaculture is an increasingly important force in both the Malaysian as well as the Singaporean economies. In recent years, Singapore has focused on the aquarium fish trade, making it one of the largest ornamental fish production and transhipment centers in the world. Similarly, the Malaysian aquaculture industry has made rapid strides in the last few years and is poised to become a major contributor to the national fish supply by the early part of the next century. A significant trend in both countries has been the growing intensification of culture systems to achieve higher production per unit area. This has led to a greater occurrence of disease, particularly among aquarium fish, shrimp and marine fish farms. To obviate and control these diseases, there has been a concurrent increase in the use of chemotherapeutants. The three major groups of commonly used chemotherapeutants are: topical disinfectants, antimicrobials and probiotics. There is a wide range of topical disinfectants used by aquafarmers. The most common of these include lime, teaseed cake, formalin, benzalkonium chloride, acriflavine, malachite green, hypochlorite and poly-vinyl pyrrolidine. Of these, lime and teaseed cake are used exclusively in ponds, and acriflavine and malachite green only in hatcheries, while the others are used in both systems. Antimicrobials being used include sulfonamides, tetracyclines, nitrofurans, chloramphenicol, oxolinic acid and virginiamycin. A number of other chemotherapeutants are also used, albeit on a limited basis. The current concerns surrounding the use of chemotherapeutants and the legislative framework surrounding their sale and distribution are also discussed.