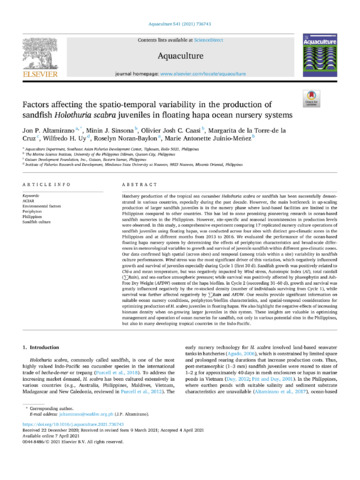 Hatchery production of the tropical sea cucumber Holothuria scabra or sandfish has been successfully demonstrated in various countries, especially during the past decade. However, the main bottleneck in up-scaling production of larger sandfish juveniles is in the nursery phase where land-based facilities are limited in the Philippines compared to other countries. This has led to some promising pioneering research in ocean-based sandfish nurseries in the Philippines. However, site-specific and seasonal inconsistencies in production levels were observed. In this study, a comprehensive experiment comparing 17 replicated nursery culture operations of sandfish juveniles using floating hapas, was conducted across four sites with distinct geo-climatic zones in the Philippines and at different months from 2013 to 2016. We evaluated the performance of the ocean-based floating hapa nursery system by determining the effects of periphyton characteristics and broad-scale differences in meteorological variables to growth and survival of juvenile sandfish within different geo-climatic zones. Our data confirmed high spatial (across site) and temporal (among trials within site) variability in sandfish culture performances. Wind stress was the most significant driver of this variation, which negatively influenced growth and survival of juveniles especially during Cycle 1 (first 30 d). Sandfish growth was positively related to Chl-a and mean temperature, but was negatively impacted by Wind stress, Autotropic Index (AI), total rainfall (∑Rain), and sea-surface atmospheric pressure; while survival was positively affected by phaeophytin and Ash-Free Dry Weight (AFDW) content of the hapa biofilm. In Cycle 2 (succeeding 31–60 d), growth and survival was greatly influenced negatively by the re-stocked density (number of individuals surviving from Cycle 1), while survival was further affected negatively by ∑Rain and AFDW. Our results provide significant information on suitable ocean nursery conditions, periphyton/biofilm characteristics, and spatial-temporal considerations for optimizing production of H. scabra juveniles in floating hapas. We also highlight the negative effects of increasing biomass density when on-growing larger juveniles in this system. These insights are valuable in optimizing management and operation of ocean nurseries for sandfish, not only in various potential sites in the Philippines, but also in many developing tropical countries in the Indo-Pacific.