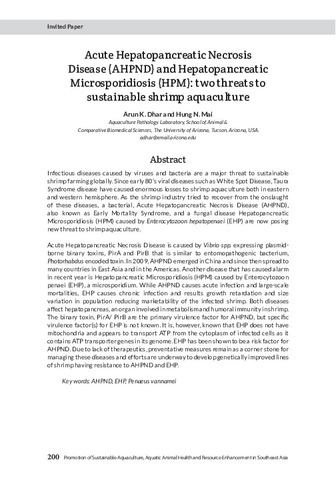 Infectious diseases caused by viruses and bacteria are a major threat to sustainable shrimp farming globally. Since early 80’s viral diseases such as White Spot Disease, Taura Syndrome disease have caused enormous losses to shrimp aquaculture both in eastern and western hemisphere. As the shrimp industry tried to recover from the onslaught of these diseases, a bacterial, Acute Hepatopancreatic Necrosis Disease (AHPND), also known as Early Mortality Syndrome, and a fungal disease Hepatopancreatic Microsporidiosis (HPM) caused by Enterocytozoon hepatopenaei (EHP) are now posing new threat to shrimp aquaculture. Acute Hepatopancreatic Necrosis Disease is caused by Vibrio spp. expressing plasmidborne binary toxins, PirA and PirB that is similar to entomopathogenic bacterium, Photorhabdus encoded toxin. In 2009, AHPND emerged in China and since then spread to many countries in East Asia and in the Americas. Another disease that has caused alarm in recent year is Hepatopancreatic Microsporidiosis (HPM) caused by Enterocytozoon penaei (EHP), a microsporidium. While AHPND causes acute infection and large-scale mortalities, EHP causes chronic infection and results growth retardation and size variation in population reducing marketability of the infected shrimp. Both diseases affect hepatopancreas, an organ involved in metabolism and humoral immunity in shrimp. The binary toxin, PirA/ PirB are the primary virulence factor for AHPND, but specific virulence factor(s) for EHP is not known. It is, however, known that EHP does not have mitochondria and appears to transport ATP from the cytoplasm of infected cells as it contains ATP transporter genes in its genome. EHP has been shown to be a risk factor for AHPND. Due to lack of therapeutics, preventative measures remain as a corner stone for managing these diseases and efforts are underway to develop genetically improved lines of shrimp having resistance to AHPND and EHP.