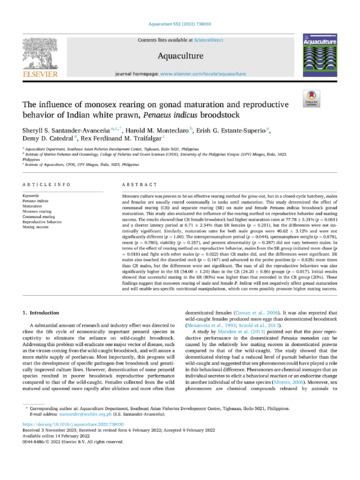 Monosex culture was proven to be an effective rearing method for grow-out, but in a closed-cycle hatchery, males and females are usually reared communally in tanks until maturation. This study determined the effect of communal rearing (CR) and separate rearing (SR) on male and female Penaeus indicus broodstock gonad maturation. This study also evaluated the influence of the rearing method on reproductive behavior and mating success. The results showed that CR female broodstock had higher maturation rates at 77.78 ± 5.31% (p = 0.061) and a shorter latency period at 6.71 ± 2.54% than SR females (p = 0.211), but the differences were not statistically significant. Similarly, maturation rates for both male groups were 40.62 ± 3.12% and were not significantly different (p = 1.00). The interspermatophore period (p = 0.044), spermatophore weight (p = 0.878), count (p = 0.780), viability (p = 0.257), and percent abnormality (p = 0.257) did not vary between males. In terms of the effect of rearing method on reproductive behavior, males from the SR group initiated more chase (p = 0.018) and fight with other males (p = 0.022) than CR males did, and the differences were significant. SR males also touched the discarded molt (p = 0.167) and advanced to the probe position (p = 0.525) more times than CR males, but the differences were not significant. The sum of all the reproductive behaviors was also significantly higher in the SR (54.00 ± 1.20) than in the CR (24.20 ± 0.86) groups (p = 0.017). Initial results showed that successful mating in the SR (80%) was higher than that recorded in the CR group (20%). These findings suggest that monosex rearing of male and female P. indicus will not negatively affect gonad maturation and will enable sex-specific nutritional manipulations, which can even possibly promote higher mating success.