Common edible molluscs of the Philippines: A field guide 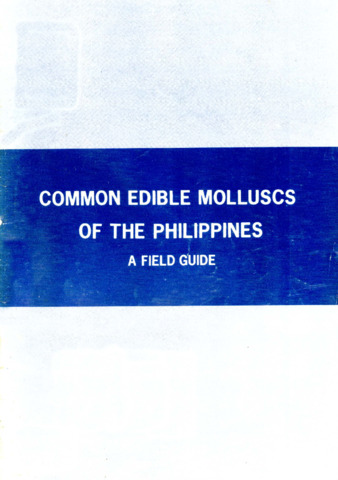 The Molluscs comprise the largest phylum of marine invertebrates, with over 80,000 species described (Barnes, 1974). They are soft-bodied animals, which, in most cases, secrete a protective outer "shell." Two major classes of molluscs, the Bivalvia and Gastropoda (or univalves), are covered in this work, as they contain most of the edible and economically important species. Class Cephalopoda is represented by the Chambered Nautilus. Because of the huge number of molluscan species inhabiting Philippine waters (over 20,000 by some estimates) this study has been limited to the most common edible ones existing on and around the island of Panay in the Western Visayas region. This region was selected as representative because some species unique to the Philippine co-exist here with many that are commonly found throughout the Indo-Pacific (Abbott, 1979) and because Panay is located in the geographic center of the Philippines. The species described here are primarily marine, with a few brackish and fresh water varieties included. Marine species predominate in local diets, partly as a result of the increased use of chemical pesticides and fertilizers in recent years in ricelands and fishponds, which were once prime habitats for many edible fresh and brackish water species. As our world becomes more polluted and populous, edible molluscs, which serve as a major source of protein for many millions of people (Abbott, 1976), are becoming a primary focus of those involved in mariculture activities. This field guide is intended not only for them, but also for students, shell collectors, travelers, and anyone interested in molluscs and how they benefit the people of the Philippines. This work consists of a series of identification sheets which contain the following basic information: 1. Pen and ink drawings and photographs of each species 2. Scientific classification 3. Common names in English and Philippine dialects 4. Brief description of shell color and form 5. Ecological and habitat description 6. Collection and/or culture techniques 7. Market price 8. Preparation as food Supplementary or unusual information about each species is also included where appropriate.