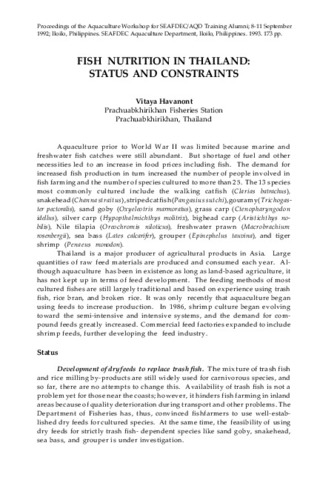 Aquaculture prior to World War II was limited because marine and freshwater fish catches were still abundant. But shortage of fuel and other necessities led to an increase in food prices including fish. The demand for increased fish production in turn increased the number of people involved in fish farming and the number of species cultured to more than 25. The 13 species most commonly cultured include the walking catfish (Clarias batrachus), snakehead (Channa straitus),striped catfish (Pangasius sutchi), gouramy (Trichogaster pectoralis), sand goby (Oxyeleotris marmoratus), grass carp (Ctenopharyngodon idellus), silver carp (Hypopthalmichthys molitrix), bighead carp (Aristichthys nobilis), Nile tilapia (Oreochromis niloticus), freshwater prawn (Macrobrachium rosenbergii), sea bass (Lates calcarifer), grouper (Epinephelus tauvina), and tiger shrimp (Penaeus monodon). Thailand is a major producer of agricultural products in Asia. Large quantities of raw feed materials are produced and consumed each year. Although aquaculture has been in existence as long as land-based agriculture, it has not kept up in terms of feed development. The feeding methods of most cultured fishes are still largely traditional and based on experience using trash fish, rice bran, and broken rice. It was only recently that aquaculture began using feeds to increase production. In 1986, shrimp culture began evolving toward the semi-intensive and intensive systems, and the demand for compound feeds greatly increased. Commercial feed factories expanded to include shrimp feeds, further developing the feed industry.