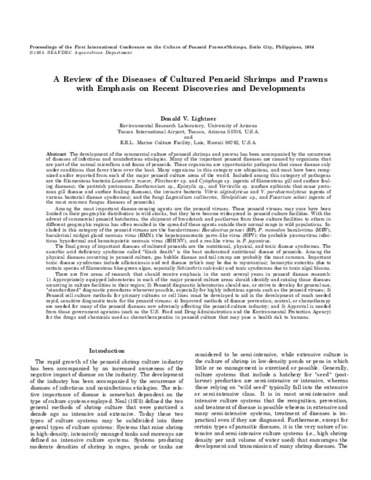 The development of the commercial culture of penaeid shrimps and prawns has been accompanied by the occurrence of diseases of infectious and noninfectious etiologies. Many of the important penaeid diseases are caused by organisms that are part of the normal microflora and fauna of penaeids. These organisms are opportunistic pathogens that cause disease only under conditions that favor them over the host. Many organisms in this category are ubiquitous, and most have been recognized and/or reported from each of the major penaeid culture areas of the world. Included among this category of pathogens are the filamentous bacteria Leucothrix mucor, Flexibacter sp. and Cytophaga sp. (agents of filamentous gill and surface fouling diseases); the peritrich protozoans Zoothamnium sp., Epistylis sp., and Vorticella sp. (surface epibionts that cause protozoan gill disease and surface fouling diseases), the invasive bacteria Vibrio alginolyticus and V. parahaemolyticus (agents of various bacterial disease syndromes); and the fungi Lagenidium callinectes, Sirolpidium sp., and Fusarium solani (agents of the most common fungus diseases of penaeids). Among the most important disease-causing agents are the penaeid viruses. These penaeid viruses may once have been limited in their geographic distribution in wild stocks, but they have become widespread in penaeid culture facilities. With the advent of commercial penaeid hatcheries, the shipment of broodstock and postlarvae from these culture facilities to others in different geographic regions has often resulted in the spread of these agents outside their normal range in wild populations. Included in this category of the penaeid viruses are the baculoviruses: Baculovirus penaei (BP), P. monodon baculovirus (MBV), baculoviral midgut gland necrosis virus (BMN); the hepatopancreatic parvo-like virus (HPV); the probable picornavirus infectious hypodermal and hematopoietic necrosis virus (IHHNV), and a reo-like virus in P. japonicus. The final group of important diseases of cultured penaeids are the nutritional, physical, and toxic disease syndromes. The ascorbic acid deficiency syndrome called "black death" is the best understood nutritional disease of penaeids. Among the physical diseases occurring in penaeid culture, gas bubble disease and tail cramp are probably the most common. Important toxic disease syndromes include aflatoxicosis and red disease (which may be due to mycotoxins); hemocytic enteritis (due to certain species of filamentous blue-green algae, especially Schizothrix calcicola) and toxic syndromes due to toxic algal blooms. There are five areas of research that should receive emphasis in the next several years in penaeid disease research: 1) Appropriately equipped laboratories in each of the major penaeid culture areas should identify and catalog those diseases occurring in culture facilities in their region; 2) Penaeid diagnostic laboratories should use, or strive to develop for general use, "standardized" diagnostic procedures whenever possible, especially for highly infectious agents such as the penaeid viruses; 3) Penaeid cell culture methods for primary cultures or cell lines must be developed to aid in the development of much needed rapid, sensitive diagnostic tests for the penaeid viruses; 4) Improved methods of disease prevention, control, or chemotherapy are needed for many of the penaeid diseases now adversely affecting the penaeid culture industry; and 5) Approval is needed from those government agencies (such as the U.S. Food and Drug Administration and the Environmental Protection Agency) for the drugs and chemicals used as chemotherapeutics in penaeid culture that may pose a health risk to humans.