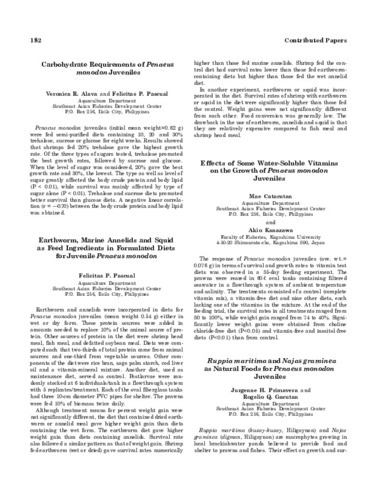 Earthworm and annelids were incorporated in diets for Penaeus monodon juveniles (mean weight 0.54 g) either in wet or dry form. These protein sources were added in amounts needed to replace 10% of the animal source of protein. Other sources of protein in the diet were shrimp head meal, fish meal, and defatted soybean meal. Diets were computed such that two-thirds of total protein came from animal sources and one-third from vegetable sources. Other components of the diet were rice bran, sago palm starch, cod liver oil and a vitamin-mineral mixture. Another diet, used as maintenance diet, served as control. Postlarvae were randomly stocked at 6 individuals/tank in a flowthrough system with 5 replicates/treatment. Each of the oval fiberglass tanks had three 10-cm diameter PVC pipes for shelter. The prawns were fed 10% of biomass twice daily. Although treatment means for percent weight gain were not significantly different, the diet that contained dried earthworm or annelid meal gave higher weight gain than diets containing the wet form. The earthworm diet gave higher weight gain than diets containing annelids. Survival rate also followed a similar pattern as that of weight gain. Shrimp fed earthworm (wet or dried) gave survival rates numerically higher than those fed marine annelids. Shrimp fed the control diet had survival rates lower than those fed earthworm-containing diets but higher than those fed the wet annelid diet. In another experiment, earthworm or squid was incorporated in the diet. Survival rates of shrimp with earthworm or squid in the diet were significantly higher than those fed the control. Weight gains were not significantly different from each other. Food conversion was generally low. The drawback in the use of earthworm, annelids and squid is that they are relatively expensive compared to fish meal and shrimp head meal.