Biotechnological researches at the Prefectural Fisheries Experimental Station in Japan 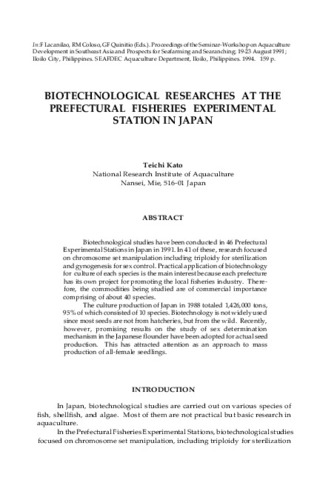 Biotechnological studies have been conducted in 46 Prefectural Experimental Stations in Japan in 1991. In 41 of these, research focused on chromosome set manipulation including triploidy for sterilization and gynogenesis for sex control. Practical application of biotechnology for culture of each species is the main interest because each prefecture has its own project for promoting the local fisheries industry. Therefore, the commodities being studied are of commercial importance comprising of about 40 species.The culture production of Japan in 1988 totaled 1,426,000 tons, 95% of which consisted of 10 species. Biotechnology is not widely used since most seeds are not from hatcheries, but from the wild. Recently, however, promising results on the study of sex determination mechanism in the Japanese flounder have been adopted for actual seed production. This has attracted attention as an approach to mass production of all-female seedlings.