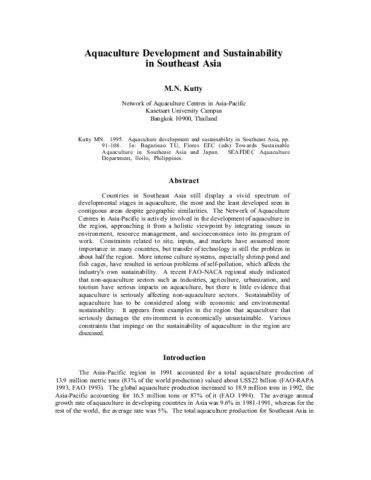 Countries in Southeast Asia still display a vivid spectrum of developmental stages in aquaculture, the most and the least developed seen in contiguous areas despite geographic similarities. The Network of Aquaculture Centres in Asia-Pacific is actively involved in the development of aquaculture in the region, approaching it from a holistic viewpoint by integrating issues in environment, resource management, and socioeconomics into its program of work. Constraints related to site, inputs, and markets have assumed more importance in many countries, but transfer of technology is still the problem in about half the region. More intense culture systems, especially shrimp pond and fish cages, have resulted in serious problems of self-pollution, which affects the industry's own sustainability. A recent FAO-NACA regional study indicated that non-aquaculture sectors such as industries, agriculture, urbanization, and tourism have serious impacts on aquaculture, but there is little evidence that aquaculture is seriously affecting non-aquaculture sectors. Sustainability of aquaculture has to be considered along with economic and environmental sustainability. It appears from examples in the region that aquaculture that seriously damages the environment is economically unsustainable. Various constraints that impinge on the sustainability of aquaculture in the region are discussed.